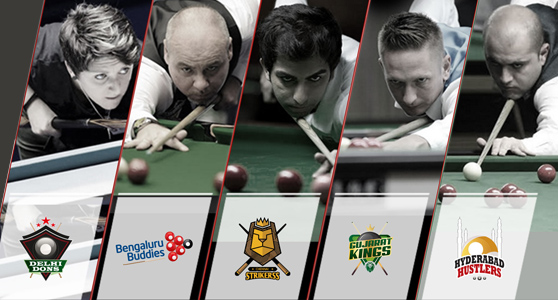 With the first of its kind maiden league in the country, it is going to set the baize on fire from 19th August, 2017. Here’s a sneak peek to the Marquee players.

We start with our very own, “The Golden Boy” Pankaj Advani representing Chennai Strikerss. Advani who is a 16 time world champion, 12 in Billiards and 4 in Snooker, has a highest break of 876 in billiards and 145 in snooker. Hailing from Pune, Advani was introduced to the sport by his elder brother Dr. Shree Advani. Winning his first title at an early age of 12 he went on to set many International and National records, one of them being a hat trick of hat tricks in English Billiards. He has also been conferred with many National honorary awards in India which include Arjuna Award, Rajiv Gandhi Khel Ratna Award and Padma Shri.

The Second player we need to watch out for in the league is the “Welsh Teeth” Darren Morgan who will be playing for the Bengaluru Buddies. A Welsh professional snooker player with a highest break of 145 currently competes in the amateur circuit. He has achieved a highest rank of 8 in the world and was ranked between the top 16 for several years. He has achieved 111 century breaks in his career. Only 49 players in the world have achieved this century of centuries in professional play.

Kelly Fisher, a female phenomenon popularly known as “Kwikfire” is representing Delhi Dons. Kelly hails from England and is a professional pool and snooker player. Growing up in West Yorkshire, Fisher learned to play pool in her parent’s club and took up snooker at the age of 13. She was world number 1 at a young age of 21 and won the World Ladies Snooker Championship 6 times. She ruled the European circuit by winning the European Ladies Snooker Championship 7 times.

Joining the league of Marquee players in this first of its kind Cue Masters league in India is the “Welsh Wizard”Andrew Pagett. Representing Gujarat Kings in the league Pagett is a professional Welsh snooker player. A former world amateur quarter-finalist and European Championship runner-up, Pagett joined the pro circuit in 2008. Pagett is a 2 time Welsh champion and 3 time British champion.

Last but not least in the marquee player list is “The Persian Lion” Amir Sarkhosh who will be playing for the Hyderabad Hustlers. Sarkhosh is from Iran and is a delight to watch with his smooth style of play. Amir with his compatriot Sohail Vahedi was crowned champion in the IBSF World Snooker Team Event, 2016.

The league will be covered by Sony ESPN, Sony ESPN HD and Sony Liv from 19th – 25th August and will have the fans on the edge.